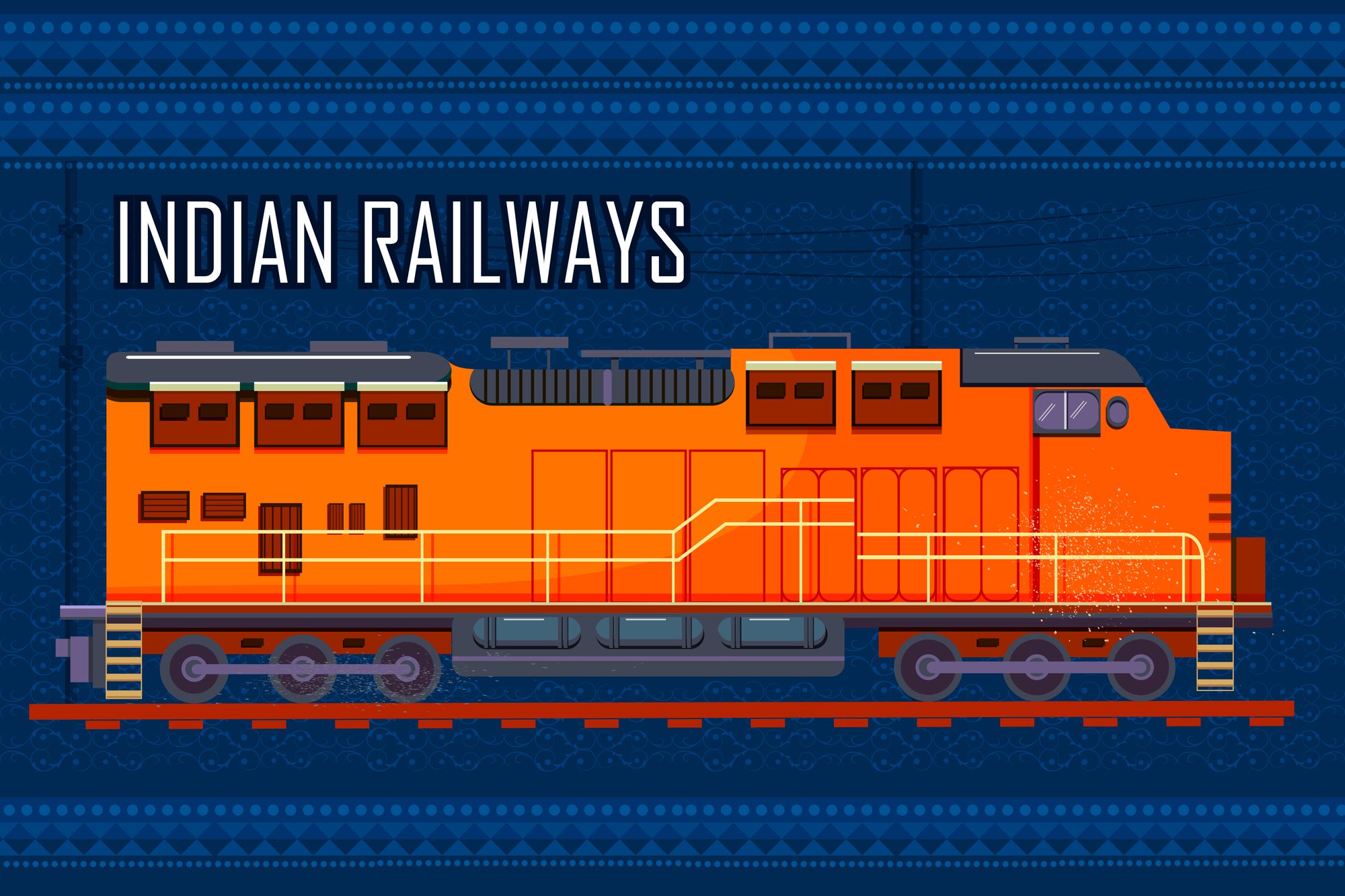 Interesting Facts about the Indian Railways

India boasts of one of the world’s largest railway systems, with the country’s extensive railway network ranking 3rd in the world based on length (a staggering 68,443 km).

It is also the largest railway system to be operated by a single government and is often regarded as the world’s largest railway network. Based on plain volumes, it carries over 8421 million passengers annually on 9991 trains connecting 7172 stations across the country, as of 2015.
In this article, we explore some eye-rubbing statistics and amazing facts about the Indian Railway System, which is directly or indirectly an essential part of the life of every Indian.

In operation for over 100 years, Indian Railways boasts an extensive list of records to its name, some of which are mentioned below.

While currently second-largest globally, passenger movement in the Indian Railway System is soon to top the chart, reaching 40% of the global activity. Rail passenger traffic in India has increased by almost 200 percent since 2000 and freight traffic by 150 percent.

India will be home to the world’s highest railway bridge

Indian Railways is building a 1.3km-long bridge across the Chenab River in Jammu and Kashmir. The bridge, constructed at the height of 359 meters from the riverbed, is 35 meters taller than the Eiffel Tower, can resist temperatures up to -20 degrees Celsius, with the concrete pillars of the bridge being built strong enough to withstand explosions.

India has the train with the longest route in the subcontinent

The Vivek Express covers 4286 km, running between Dibrugarh and Kanyakumari, making it the longest railway route in the Indian Subcontinent. The trains, announced in the railway budget of 2011-2012, were started to commemorate the 150th birth anniversary of Swami Vivekananda.

India is home to the world’s oldest running locomotive

The Fairy Queen is the world’s oldest running locomotive that is still in use, manufactured in 1855. The train, given heritage status in 1972, is listed in the Guinness Book of World Records. It operates between Delhi and Alwar, traveling at a speed of 40 km/hr.

With a total of 1.4 million employees, Indian Railways is the world’s eighth-largest employer.

India has a diamond-crossing of railway tracks

The Diamond crossing in Nagpur is a crossing of railway tracks from where trains can go in all cardinal directions, North, South, East, and West.

Some FAQs & Interesting Facts about the Indian Railways

Alongside these surprising records, The Indian Railways also holds several quirks to its credit. To satisfy the inquisitive mind, we present some amazing facts about the Indian Railway System below.

Q. Which was the first train to run in India?

Ans: India’s passenger train, built by the Great Indian Peninsular Railway, ran from Bori-Bunder to Thane in 1853. The train covered a stretch of 33 km and carried 400 passengers. Coincidentally, Bori Bunder was also the first railway station in India.

Q. What is the length of India’s longest railway tunnel?

Ans: The Pir Panjal Railway Tunnel or Banihal railway tunnel is an 11.25-kilometer-long railway tunnel located in Pir Panjal Range of the middle Himalayas in Jammu and Kashmir, India, north of Banihal town. It opened in 2013 and can tolerate an operating speed of up to 75 km/hr.

Q. Which is the busiest railway station in the country?

Ans: The Howrah Junction in Kolkata is the busiest railway station in the country with 974 trains stopping there daily. It is also the oldest and largest operational railway station in India, having 23 platforms, with over 3 million people travelling daily through Howrah.

Q. Which Indian Railway Station has the longest name?

Ans: Venkatanarasimharajuvaripeta at the Andhra Pradesh -Tamil Nadu border, is the station in India with the longest name (29 letters).

Q. Which Indian Railway Station has the shortest name?

​​​​​​​Ans: ‘Ib Railway station’ in Odisha has the shortest name of all stations in the entire Indian Railways network. It gets its name from the Ib river, which is a tributary of Mahanadi.

Q. Does India have a bullet train?

Ans: The National High-Speed Rail Corporation Limited (NHSRCL) will launch the first bullet train in India in 2023, running from Mumbai in Maharashtra to Ahmedabad in Gujarat, covering a distance of 525 km at a speed of 200 mph. The train would cover 12 stations, covering 155.76 km in Maharashtra, 4.3 kilometers in Dadra and Nagar Haveli, and 348.04 kilometers in Gujarat.

Q. When did computerized reservations begin in India?

Ans: While IRCTC, India’s railway ticketing system is entirely computerized for many years today, computerized reservations first began in India in New Delhi in 1986. The IRCTC is one of the busiest websites in India, with over 12 lakh hits per minute.

Q. Does India have a mascot for its railways?

Ans: The mascot for Indian Railways is Bholu, the guard elephant designed by the National Institute of Design. It was unveiled on 16th April 2002.

Q. Which is the slowest railway train in India?

Ans: Mettupalayam Ooty Nilgiri Passenger train has the record of being the slowest train in India, running at 10 kmph. Since the train operates in a hilly area, it covers just 46 km in about 5 hours.

Q. Which is the most expensive train in India?

Ans: The Maharaja’s Express is the most expensive train, not just in India but also in Asia. It takes its guests on a luxurious journey spanning 8 days, covering India’s prominent tourist destinations, from Agra’s iconic Taj Mahal to Mumbai in Maharashtra. Prices start at $800 and go all the way to $2500 for the presidential suite.

Q. When did India run its first electric train?

Q. How many trains are operated in India?

Ans: The Indian Railways operates as many as 11000 trains in a day.

Q. Which was the first train to cross the Indian Border?

Ans: The Samjhauta Express began as a bi-weekly train that ran between Delhi and Attari in India and Lahore in Pakistan on Thursday and Monday, traveling 502 km over 12 hours. It paused services on August 8, 2019, over border tensions between the two countries.

Q. What is the Duronto Express?

Ans: Duronto Express is a series of long-distance, high-speed, non-stop source to destination trains introduced by the Indian Railways. Introduced in 2009-2010, they are among the fastest trains in India with speeds as high as 140 km/hr.

The Ernakulam–Duronto running between Kochi in Kerala and New Delhi covers the longest route of 2,943 km.

Q. Which is the longest rail bridge in India?

Ans: The Bogibeel Bridge started in 2018, is the longest rail bridge in India with a length of 4940 m. It is situated in Assam over the Brahmaputra River. Construction of the bridge began in 2002, and the bridge started operating on 25 December 2018.

Q. When was the first sea bridge in India?

Ans: The Pamban Bridge connecting the town of Mandapam in mainland India with Pamban Island and Rameswaram holds the distinction of being India’s first sea bridge. The bridge measures 2065 m. Opened on 24 February 1914, it was the longest sea bridge in India for almost 100 years until the completion of the Worli-Bandra sea link in 2010.

Q. Which Railway Station in India has the maximum number of routes originating from it?

Ans: The Mathura Railway Station in Uttar Pradesh, serving Mathura and Vrindavan has the maximum number of routes originating from it. It has as many as 7 routes emerging from it.

Q. Which is the highest railway station in India?

Ans: The Ghum Railway Station, located in Darjeeling, West Bengal, is the highest railway station in India, located at a height of 2258 meters. Opened on 4 April 1881, it is also one of the oldest railway stations in the country.

Q. When did metro operations begin in India?

Ans: The Kolkata Metro is the first underground metro railway system in India. The first stretch opened in 1984 and extended from Netaji Bhawan (erstwhile Bhawanipore) to Esplanade.

Q. Which is the largest metro station in India?

Ans: The Kempegowda Station Majestic, located in Bengaluru, Karnataka holds the distinction of being the largest metro station in the country.

Home to outstanding records, amazing feats and serving a country home to over 135 crore people, India’s Railway System is a classic example of an incredible feat, a fine wine that only gets better with age.