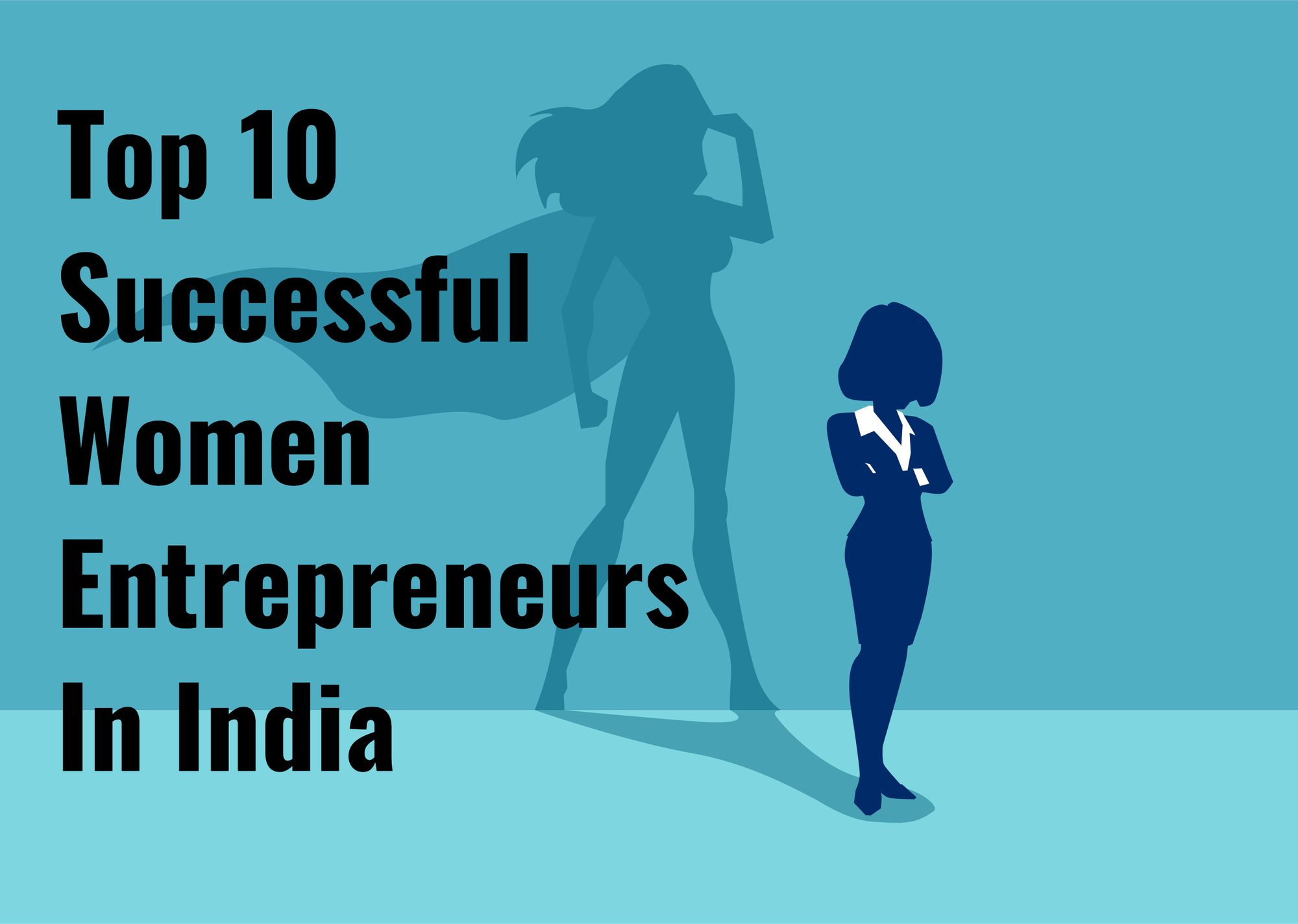 With constant developments in the Indian ecosystem, more and more women are pursuing the entrepreneurial dream, and flourishing in their businesses. It's extremely enabling for other Indian women who are still restricted to the traditional housewife character to think for themselves. In the past decade, the status of women in Indian society has transformed drastically. Today, Women play a vital role in the growth of the Indian economy and have made an amazing impact and achieved a breakthrough in every sector.

According to the National Sample Survey, only about 14% of the businesses are run by women entrepreneurs in India. Most of the businesses are bootstrapped and run on a smaller scale. The global inequality is apparent in a record that says nearly 126 million women have their own company across the globe while Indian women shuffle around the 8 million targets; a contradictory statement is given that India is the second-most populous country in the world.

About 58% of the female businesspeople were in the age range of 19-35 when they began. Nearly 73% of the reported revenue approximately is Rs 10 lakhs in a financial year. Around 57% of these women started solo, without any other member or partners or even investment funding. About 35% of the women's businesses had a co-founder for support and guidance. Even today, roughly 71% of Indian female entrepreneurs employ 5 people or less in the initial stages.

In a country like India, where most women aren't encouraged to think big (especially in the village areas), some have flown higher than one would assume in a constrictive composition. These sensational women have been inspiring other females to venture on an entrepreneurship trail through their success stories containing personal struggles and challenges they faced in the way. As a result, India is unwaveringly rising the ranks for a promising startup ecosystem linked with solid backing from the Indian government schemes to become a Successful Business Woman In India.

In this blog, we have curated a list of the Top 10 Successful Women Entrepreneurs In India who've done something amazing to boost the Indian economy and inspired many women.

After working for a couple of decades as an investment banker with Kotak Mahindra Bank, she left the job to pursue her vision. In 2012, she started her company Nykaa, which retails cosmetic and wellness products online. Today, the company has become extremely popular among Indian women and men making her a top Successful Business Woman In India. Nykaa offers more than 1000+ brands and has opened 35 physical stores in malls and LUXE Category.

Apart from that, newer apps such as Nykaa Fashion and Nykaa Men were launched in order to take over the merchandise and men's grooming category. In 2017, she received the title of “Most powerful business “by Business Today. She has also been awarded the “Woman Ahead” at the ET(Economic Times). Since 2014, Nykaa has been a partner with Femina where they host FEMINA Cosmopolitan Nykaa Beauty Awards and present awards to various beauty products present in the Indian market.

Ritu Kumar is a popular Indian fashion designer. She began her career in fashion at Kolkata where she was initially designing evening wear and bridal couture. After a couple of decades, she entered the international market. She's been running her business in many different forging cities in France and New York. In the year 2013, she was awarded Padma Shree by the Indian government.

Aditi Gupta is a social-cause entrepreneur along with being the co-founder of Menstrupedia. This company works on spreading awareness about menstruation. She started this organization with her husband, Tuhin Paul. The inspiration behind Menstrupedia originated from her own experiences with this so-called taboo. Menstrupedia has become remarkably popular among girls and women trying to gain information on the topic.

Aditi continues to inform women about menstrual hygiene to eliminate certain misunderstandings against this genetic process. She is indeed amongst the treasures who want to do something important for society.

In the year 2012, Suchi Mukherjee formed the online clothing and lifestyle accessories website and called it Limeroad. Today Limeroad is known as India’s most stylish online shopping portal for both men and women. If we talk about her achievements, she has received many awards like the Coolest Start-up of the year (from Business Today), Infocom woman of the year- Digital Business, and Unicorn Start-up Award (from NDTV).

Anisha Singh isn't a stranger to entrepreneurial obstacles in India; she went through several ups and downs in life before obtaining the success she enjoys today. She is the co-founder and CEO of India’s biggest deals platform, Mydala. Anisha Singh's journey began when she was working in Capitol Hill and advising entrepreneurs. Later she joined a software company in Boston where she composed e-learning ecosystems. She's known for unabashedly supporting all women causes and campaigns. She speaks her mind out and never caves in to fear. Anisha hails from New Delhi and is counted among the most successful businesswomen in India and was also the judge for an Indian reality show that was based on entrepreneurship.

Shradha is a pioneer Successful Business Woman In India and one of the topmost Female Entrepreneurs In India. When she was at the peak of her career with numerous powerful media houses, she came into interaction with many entrepreneurs success stores. Soon she realised many booming and budding entrepreneurs are lacking a platform to cover them. She then launched YourStory was launched in 2008 and has 70k+ stories on its website today. Shradha today heads a team of 100+ people who contribute content in 11 local languages. Her awards accolades include- Worlds’ Top 500 LinkedIn Influencers and L’Oreal Paris Femina Award.

Vandana Luthra is an Indian businesswoman, philanthropy and chairperson of the beauty & Wellness sector skill council (B&WSSC). In 1989, she started VLCC as a beauty and slimming service centre. Later, she added more services such as hair growth, full-body laser, grooming and Dermatology services. In April 2013, she was awarded the Padma Shree by Indian President Mr Pranab Mukherjee. She has been running NGO called Khushi, which offers a scholarship for free education for underprivileged and physically challenged people.

With more than 15 years of marketing experience in various industries such as Fashion & lifestyle, Advertising & public relations, amongst others. She became Co-founder of Shopclues.com in 2011 the company was started in Silicon Valley. Today, this e-commerce company has become India’s most comprehensively managed marketplace and has over 7 million visitors monthly. ShopClues serves more than 9000 cities. Her achievement makes her innovative tech Successful Women Entrepreneurs In India.

Ekta Kapoor is the woman who has changed the face of Indian Television since the 2000s. It doesn't matter whether you love or hate those popular Balaji Serials, you can't ignore the fact that they were the face of Indian Television for over a decade. And Ekta Kapoor was the only woman who single-handedly established and made Balaji Telefilms a household name throughout the country. Ekta won the 'Hall of Fame' award at the 6th Indian Telly Awards in 2006 for her exceptional contributions to the Indian Television Industry. She has an image of the fierce advocate of her company and brand. Ekta is also well-known for her sharp business insight and professionalism making her a Successful Business Woman In India.

Today, the women of our country have come a long way from being just normal housewives and are an equal match to some of the most influential men in the corporate atmosphere. From being the heads of global industry giants to founders to some of the most unique startups, women have made a mark almost universally one can think of. But their entrepreneurial journey wasn't always easy, as they have fought against various contrary notions and proved their mettle eradicating any doubts be it regarding- Leadership capabilities or entrepreneurial skills.

Download OkCredit now & get rid of your bookkeeping hassles.OkCredit is 100% Made in India.