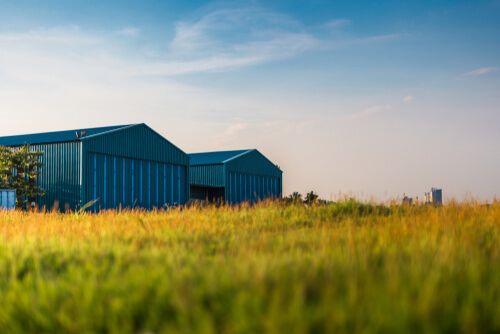 Agricultural warehousing in India is a highly profitable business venture. Storage is an important marketing function that involves keeping and preserving goods from the time they are manufactured until they are consumed.

As a result, storing goods from the time they are manufactured until they are consumed ensures a continuous flow of goods in the market. Storage benefits perishable and semi-perishable products by preserving their quality. It aids in price stability by adjusting demand and supply; storage is required for a period of time in order to perform other marketing functions. Also, storage generates both employment and income due to its low cost.

You'll find statistical data on warehousing as well as information on prospective opportunities in the space in this article.

What is Agricultural Warehousing in India?

Warehouses are scientifically designed storage structures that protect the quantity and quality of stored products for agricultural warehousing in India. The product is protected against both quantitative and qualitative losses by using the necessary preservation methods. Warehouses meet the financial requirements of the person storing the product. Nationalised banks extend credit to the extent of 75% to 80% of the value of the stored products based on the security of the warehouse receipt. By reducing farmers' proclivity for post-harvest sales, warehouses help to stabilise agricultural commodity prices.

To store and conserve such large amounts, agricultural warehousing in India currently has a total capacity of approximately 91 MMT, with state agencies owning 41% of the capacity and the remainder distributed among private entrepreneurs, cooperative societies, farmers, and so on. Agricultural warehousing accounts for 15% of India's warehousing market, with a value of INR 8,500 crore. The Indian logistics market is expected to grow at a CAGR of 12.17% by 2020, owing to the expansion of the manufacturing, retail, FMCG, and e-commerce sectors.

In recent years, the Indian warehousing industry has changed dramatically, resulting in a gradual shift away from traditional godowns and toward modern warehouse formats. This demand will be driven by rising GDP, an increase in the share of organised retail, increased external trade, maturing industry segments, and the implementation of GST.

The life of a business owner revolves around financial accounting. With the implementation of these new GST laws, it is becoming increasingly difficult to prioritise business growth over taxes. OkCredit is a financial accounting service that provides a wide range of business-specific services, allowing you to focus on growing your company while OkCredit handles all of your financial concerns.

Opportunities in Agricultural Warehousing in India

The warehousing industry has grown rapidly in recent years for a variety of reasons. The 'Make in India' campaign, which encouraged businesses to manufacture their products in India, received widespread attention across the country. India's exports have increased significantly, implying that the volume of goods produced locally has increased as well. As a result, the demand for warehouses has increased. As a result of the relaxed FDI norms, the retail industry expanded at an exponential rate. As a result, both domestic and foreign investment was attracted.

Agricultural warehousing accounts for 15% of India's warehousing market, worth Rs. 8,500 crore. However, it is perceived as insufficient and disorganised. Warehousing has been linked to food security and agricultural growth in India. Warehousing is now recognised as a critical component of the supply chain in which goods are stored for safekeeping, and other value processes are implemented, reducing waste and costs.

India’s perishable product production has increased dramatically, including fruits, vegetables, meat, poultry, and dairy. It leads the world in milk production, with an annual rate of 138 million tonnes, and is home to more than half of all milk product processing. It is the world's second-largest vegetable producer (280.4 million tonnes) but only accounts for 6% of total processing.

As a result of the export potential, the fish and meat industries have grown steadily. India currently has 31.8 million tonnes of cold storage capacity. Over the last ten years, growth has averaged 3 to 4%, with 10.5 million tonnes of space created in the last seven years. Only the public and cooperative sectors account for 10% of capacity, while the private sector owns the vast majority of it. The sector's value is estimated to be $6.5 billion (USD), with market growth averaging 15 to 20%. Over the next five years, this rate is expected to remain constant.

Frozen foods are increasingly being purchased in organised retail stores by consumers. Cold storage market growth is expected to be driven by demand for chilled and frozen foods and the expansion of the organised retail sector during the forecast period. Depending on the proximity of residential and consumption clusters, as well as spending power, organised retail offers a variety of outlet formats. On the basis of product range and surface coverage, the offline mode of organised retailing is divided into convenience stores, supermarkets, and hypermarkets.

Market demand is expected to rise over the forecast period as refrigerated warehouses become more automated. Cloud technology, robots, conveyor belts, truck loading automation, and energy management are all part of warehouse automation. Thus, there will be more and more opportunities in Agricultural warehousing in India in the near future.

Q. Who has the largest warehousing system in India?

Ans. The Food Corporation of India, with a capacity of 26.62 million tonnes, is the single largest agency.

Q. What is a Hapur Tekka?

Ans. It is made up of a rubberised cylindrical cloth structure that is supported by bamboo poles on a metal tube base. It has a small hole at the bottom for grain removal.

Q. How many cold storages are there in India?

Ans. In India, there are over 7,700 cold storage warehouses with a capacity of more than 36 million tonnes with a large portion of the facilities being privately owned.

Q. How much would it cost to make a warehouse?