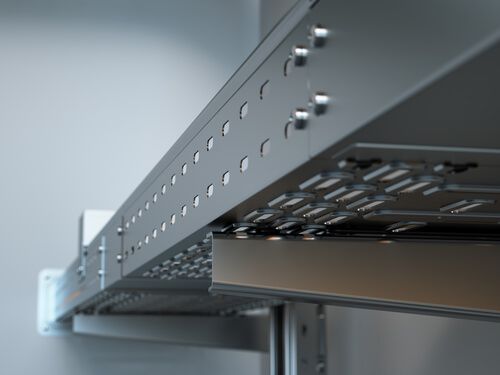 We all know that India is one of the developing nations in the world, going through major evolutions and development in diverse sectors. India has gone through many changes in the last decade, including several programs. These programs help India's industry, electricity, and public infrastructure sectors grow. The cable tray market, which is classified as an auxiliary business, has benefited significantly from the growth of these industries, which is why we can see a thriving list of cable tray manufacturers in India.

Furthermore, the cable tray market is being propelled forward by a significant focus on boosting network connectivity and expanding communication and automation technologies.

A cable tray system supports the insulated electric wires used for power distribution and communication. Cable trays are often used for cable management in commercial and industrial buildings and alternative to exposed wiring conduit systems. They're convenient when alterations to a wiring system are expected because new wires may be laid in the tray rather than pulled through a pipe.

In fact, according to numerous studies, the worldwide cable tray market is expected to increase by 3.24 billion dollars from 2019 to 2023, with India playing a vital role. This market is segmented by material, application, type, finishing, and geography, with each kind having its sub-segmentation. Choosing the best and most competent vendor to deal with might be a difficult undertaking.

Why is Cable Tray Used?

A cable tray system is used in building electrical wiring to accommodate insulated electrical wires used for power distribution, control, and communication. Cable tray manufacturers in India produce cable trays that can be used for both commercial and industrial buildings purposes.

A cable tray is a rigid structural system that uses a unit or assembly of units or sections, as well as accompanying fittings, to securely anchor or support cables and raceways. Furthermore, it is one of the most extensively used and popular cable management systems, capable of managing wires in the tray and protecting them from the environment or dangerous substances.

The cable tray's primary function is to keep the cable and wire safe and secure. These trays hold wires in place and make it easier for a maintenance crew to track and locate wiring-related issues. The cable tray enables you to track a wire to its proper location to keep up with the upkeep.

Thus, the cable tray manufacturers in India are going above and beyond to produce cable trays that offer maximum support. As a result, the government is taking significant initiatives to thrive as a whole industry in India.

Q. What is the Cable Management Market's growth rate?

Ans. Over the following five years, the Cable Management Market is expected to develop at a CAGR of 10.76%.

Q. What will the future value of the global cable tray market be?

Q. What is the significance of cable trays in the workplace?

Ans. The cable tray's primary function is to keep the cable and wire safe and secure. These trays hold wires in place and make it easier for a maintenance crew to look after and locate wiring-related components.

Q. What are the benefits of using a cable tray?

Ans. Flexibility in wiring system design, simplicity, and cheaper installation costs are all advantages of cable trays. Cable trays give a flexible advantage in plants where equipment is added, removed, or transferred.

Q. What is the maximum weight that a cable tray can support?

Ans. All trays and rungs (except 14A) are intended to withstand cable weights of up to 200 pounds.