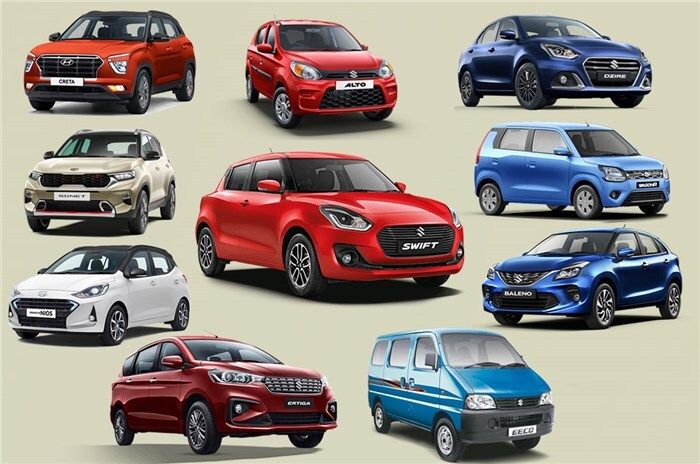 The spreading COVID-19 epidemic has changed everything, causing some of the world's largest corporations to reconsider their long-term plans. However, with drop-in automobile sales in India in 2020, the automobile industry regained a slight rise in 2021. People are eager to purchase new cars, and car manufacturers are keen to launch new car models for their buyers. All car brands in India emphasise producing vehicles that can be favourable in the Indian atmosphere and roads.

Maruti Suzuki, or Maruti Suzuki India Limited, is the largest automobile manufacturer formed in 1981. Maruti Suzuki had a vast market share of 54.16% in 2020. However, this decreased to 45.61% in March 2021 due to the pandemic. However, the company remains India's largest car company and obliges to deliver quality vehicles intended at the "family" marketplace. In addition, Maruti Suzuki is India's most cost-effective brand among all car brands, which has helped the company maintain its market share.

The Swift is one of the best-selling automobiles in the country. The Vitara Brezza, Wagon R, Alto 800, Baleno, S-Presso, Ertiga, and Dzire are a few of Maruti Suzuki's most prominent designs. Maruti also produces a few luxurious vehicles, such as the Ciaz, XL6, and S-Cross, which stand out for their specifications among all car brands in India. Maruti Suzuki is working on new models like the Jimny, Swift Hybrid, Grand Vitara, and WagonR Electric, which help Maruti Suzuki stay on top for at least another few years. Maruti Suzuki is an excellent alternative for purchasers on a limited budget to get the most profit possible.

As the second leading car manufacturing company in India, Hyundai occupies a market share of 16.41%. It is a brand that has been gaining massive fame in India. Despite this fact, the company firstly arrived in India in 1996 and hit the market with the Santro in 1998. People were amazed by what the South Korean manufacturer had to offer instantly. Hyundai keeps making headlines just over a quarter-century later with sporty hatchbacks, powerful SUVs, and stylish sedans. Hyundai has a range of models that are considered one of the best in the country.

In the hatchback class, the i20, Santro, and Grand i10 Nios are a few alternatives, while the Verna, Elantra, and Aura are one of the best-selling sedans. Hyundai's SUV offerings have grabbed the public's interest, with models such as the Venue, Creta, and the newly launched Tucson accounting for some of the world's most respected SUVs. The future of Hyundai looks promising, with models the Palisade, Nexo, Alcazar, Santa Fe, and Iconiq set to arrive in India in the next few years.

Automobile manufacturing and South Korea are a great match. Anything South Koreans put their hands on seems to emerge into something fantastic. KIA is among other brands that strike into mind, and despite being formed in 1944, the firm only entered the Indian market in 2019. On the other hand, KIA jumped right in with the Seltos, one of India's highly competitive SUVs. While KIA presently holds 5.4% of India's market share, there is no surprise that this statistic will jump in further years.

In India, KIA delivers just three models: the Seltos, Carnival, and Sonet that are highly remarkable in terms of design, pricing, and innovation. However, it seems like KIA was only testing the market in India because the South Korean automaker plans to debut a slew of new vehicles in the upcoming years. The Xceed, Rio, Sorento, Stinger, Picanto, Sportage, Ceed, and Soul have planned car models. If reports are correct, the Indian automobile sector could undergo significant changes.

When we talk about the car brands in India, this is a brand that should not be overlooked. Mahindra & Mahindra was established in 1945 and is one of India's top 20 enterprises. Whenever you consider a Mahindra vehicle, the words "lasting, tough, and wide" come to mind, and that is whatever you get with every one of their cars. Nevertheless, not everyone is seeking a car that can handle various types of terrain, which is why they only have 5% of the market share. Nonetheless, Mahindra continues to do what they do best: create a few of India's most powerful vehicles.

Everybody knows about the Scorpio, Mahindra's best-selling SUV, but the manufacturer has expanded its lineup to include a few additional vehicles. The Thar is a thrilling off-road car that can tackle practically any route you can throw at this. The XUV500 and XUV300 are high-end variants of the Scorpio, whereas the Bolero keeps its promise – and then some. The Marazzo is the latest addition to the seven-seat sector, whereas the Alturas G4 is the company's luxury SUV. Mahindra, and other automobile companies listed here, are looking towards a bright future. They all are planning to release several electric vehicles and other SUVs in the coming years. The eKUV100 and XUV300 Electric will fight with a few of the forthcoming electric vehicles, whereas the XUV300 Turbo Sportz, XUV700, and TUC 300 Plus are all intriguing prospects.

Undoubtedly, Tata is one of India's largest organisations. The Tata Company has been connected with Indian history for over 150 years and was formed in 1945. Tata has subsidiaries in nearly every industry, including communications, power, consumer products, air-conditioning, steel, airlines, hotels, and even Starbucks. With the history, it's no wonder that Tata is one of India's popular automobile manufacturers, and redesigning its lineup-buyers pay close attention to the new models that enter each year.

Last but not least, Tata Motors is one of the finest automakers that has gained a long-lasting presence in the automobile industry. Tata Motors has already managed to carve out a niche in the competitive small car sector with Tiago in recent years. On either hand, the Safari Storme, the industry's smaller SUV, has been losing support. The Harrier, on either hand, has been heavily supported in the market and is expected to help companies keep operating in the SUV sector. The Nexon, which competes against popular car models like the Maruti Vitara Brezza and Hyundai Venue, is no exception.

The Altroz, a new pricing hatchback that will compete with the Maruti Baleno and Hyundai Elite i20, will also be unveiled in the coming years. In addition, the Nexon EV and Gravitas will follow the new model, the latter being the much-anticipated seven-seat variant of the Harrier. Thanks to a competent R&D and creative team, the latest Tata motors have become global vehicles with broader appeal, thanks to a competent R&D and innovative team. With all this in mind, local manufacturing seems to have a promising future.

This article highlights the five best car brands and their best-selling models. These all car brands in India are providing the best automobile services. These Indian car brands introduce different price range cars suitable for every class. It is a high chance that with the entrance of new car brands, the automobile industry will grow very fast within three to five years.

Q. Which automobile has the most robust body?

Ans. Cars like the Skoda Karoq, Ford Endeavour, Skoda Superb, Toyota Fortuner, Zs EV, MG Gloster, and others have counted in the automobile sector are the best quality car.

Q. Which Indian automobile is the fastest?

Ans. The Lamborghini Aventador is India's fastest car, with maximum speeds of 350 mph.

Ans. Larger cars are safer than smaller ones. According to quantum mechanics, larger and more powerful things are safer than lighter and smaller objects. So every big vehicle has heavier, longer hoods and crush regions, giving them an advantage in front crashes.

Q. Which automobile in India is affordable?

Ans. The Tata Nano has the honour of being India's affordable automobile.