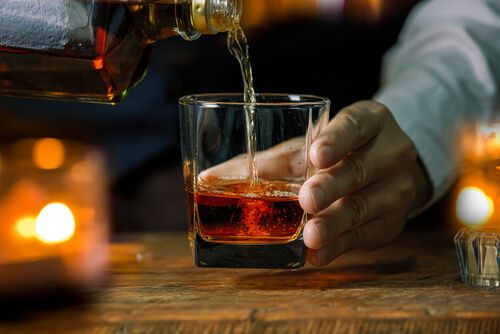 Alcohol has been enjoyed in India since time immemorial. This country of sura and madira, now also produces fine-quality drinks such as rum, whisky, beer, and more. Whisky is an alcoholic beverage produced by fermentation, distillation, and maturation. Whisky is formulated using three main substances, grains (malted barley, rye, wheat, or corn), water, and yeast.

Whiskies can be of various kinds, mainly Scotch Whisky, Irish whisky, and American Whisky. This classification is done based on place of origin. The taste varies significantly due to the different wheat grains available in these countries. The composition of grains also affects these drinks' taste and texture. Whisky is a standard fixture in India's parties, events, and celebrations. With many whisky lovers in the country, India has made itself a famous manufacturer and consumer. This article is a summary of the top-whisky producing brands in India!

Royal Stag is a premium whisky brand launched in 1995. This Indian brand rose to fame and has been exported to various other countries. Royal Stag Whisky is available in several variants based on volume and packaging. The main feature of this brand is that it does not use any artificial flavours. Royal Stag's marketing strategies target 25 to 40 years of age. The brand has featured various celebrities, including Shah Rukh Khan, Saif Ali Khan, Harbhajan Singh, MS Dhoni, and Andy Flower. The brand's sales have been rising ever since 2001, making it a loved whisky brand, especially amongst Indians.

Officer's Choice is a deluxe whisky brand by Allied Blenders and Distilleries (ABD) that has spread its network in more than eighteen countries. The feature that makes Officer's Choice different from Other brands is grains instead of molasses. The use of refined grains makes this whisky perfectly crafted. This brand is famous amongst the masses mainly because of its affordable prices. The 750 ml variant is available in the market for INR 300. The sales of Officer's Choice jumped from 11.1 (in a million cases) to 36.5 in a million cases) within the year range of 2009-2019.

Blenders Pride is another whisky brand owned by Pernod Ricard. This brand originated in India in the year 1995. Blenders Pride is in significant competition with other whisky brands in India. Its uniqueness can be credited to its smooth and smokey flavour. The whisky is made with an amalgamation of Indian and foreign tastes with no added chemicals. It has a 42.8% alcohol by volume percentage. Blenders Pride whisky is famous for its smooth texture and reasonable rates.

McDowell is an alcoholic beverage brand established under United Spirits Limited in 1963. McDowell's No.1 whisky was released by the firm in 1968. Beginners prefer this whisky as it contains less alcohol content than other brands. The brand is also known for manufacturing rum and brandy, having smooth flavour. McDowell's No.1 whisky combines both Indian and foreign malt whiskies. While this brand originated in India, it has spread its selling network in Africa, Canada, UAE, and Japan. McDowell's No.1 Diet Mate is a variant of McDowell's No.1 whisky, priced at a 5% higher rate than usual. This variant is the world's first diet whisky which contains ingredients that fasten metabolism.

Another whisky manufactured under the Pernod Ricard label is Imperial Blue Whisky, abbreviated as IB. This brand was launched in 1997 in India by Seagram and later joined by Pernod Ricard and Diageo in 2001. Pernod Ricard became the sole owner of Imperial Blue later in 2002 with the tagline 'men will be men.' Imperial Blue released a short film in 2011 titled 'Men will be men' as an advertising strategy. Imperial Blue whisky is light-bodied and reasonable. These are some of the causes that make it a popular choice amongst the 25-40 age group.

8 PM whisky was launched in 1999 by Radico Khaitan. In its first year of launch, it sold around one lakh cases, thus making its place in the LIMCA book of records. The whisky is available in different packaging by volume, set at different prices. However, all the prices are pretty affordable. 8 PM is blended with rich quality grains and has a pan-India appeal. Its rich medium finish allows its consumers to celebrate success and relationships. It has become one of the fastest-growing whisky brands in India.

Black Dog Reserve Whisky was founded in 1883 in Scotland. Thanks to its vast consumer base, the brand's legacy has continued for 130 years now. The brand comes in 2 variants, Black Dog Black Reserve and Black Dog Triple Gold Reserve. Black Dog Triple Gold Reserve is the first and only Triple Matured Scotch in its class, as all other scotch whiskies are matured only twice. Black Dog Reserve is an unusually smooth blend of malt and grain whiskies from Scotland. The brand has previously won Bronze at the International Spirits Challenge.

As whiskies form an essential part of many celebrations and events, their apt Choice can be difficult sometimes. India is the host to many whisky brands that have gained a lot of success in the past years. This article above summarises the details about the top whisky brands in India to help you choose the best!

Q. Which are some of the best whiskies by Pernod Ricard?

Q. What is the usual cost of Chivas Regal 12 years in India?

Ans. The 100 ml variant for Chivas Regal 12 years is priced at Rs.3280 in India. However, the prices may slightly vary from state to state as per state taxes.

Ans. Black Dog Triple Gold Reserve is the first and only Triple Matured Scotch in its class, as all other scotch whiskies are matured only twice.

Q. Which is a top-class whisky available at reasonable rates in India?

Ans. Officer's Choice whisky and McDowell No.1 whisky are some of India's best whisky brands available at cheap rates.

Q. What is McDowell's No.1 Diet Mate?

Ans. McDowell's No.1 Diet Mate is a variant of McDowell's No.1 whisky, priced at a 5% higher rate than the usual price. This variant is the world's first diet whisky which contains ingredients that fasten metabolism.