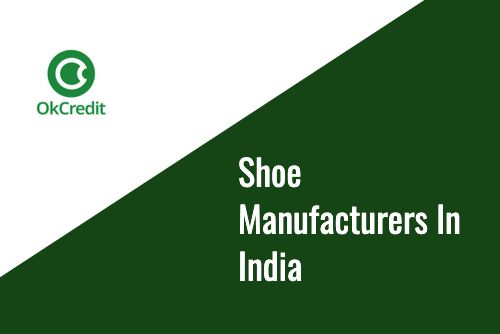 The Indian footwear industry is witnessing strong growth not just in domestic sales but also in export earnings. The growth can be attributed to the fact that the footwear industry in India continues to boom at a substantial rate. Today, India is the second-largest shoe producer and the sixth-largest shoe exporter globally. The footwear industry employs around 5 million people in India and the industry is growing at  24.73% (CAGR 2021-2025) annually. With the increasing focus on technology and innovation in footwear production as well as continuous support from the government, the top shoe manufacturers in India are expected to achieve greater success in the domestic market. This blog is about the top 10 shoe manufacturers in India and where you can contact them.

Bata is a wholesale distributor of major brands in the industry. Their focus is high-volume footwear sales to large-scale retailers across India. Their primary product groups include women's and men's leather shoes, casual leather boots, sports footwear, work footwear, and safety footwear. The business model they operate under is a flagship store-based retail distribution system where all over the business operates through an exclusive dealer network and delivers directly to consumers.

Liberty Shoes, a leading producer of leather footwear, has been around since 1954. It is one of the largest leather shoe companies in India and is among the top five producers of leather products in the world. It produces 50,000 pairs of shoes daily through its six manufacturing units globally. The company also has established a presence around the globe with an annual turnover of more than $80 million made annually across 30 different countries.

Relaxo Footwear Ltd. is one of the most famous shoe manufacturers in India with its headquarters located in New Delhi and 8 production units. Every day, Relaxo Footwear produces over 6 Lakhs pairs of footwear. The company boasts a variety of fashionable designs that are comfortable, stylish, and well-made. Relaxo makes shoes for men, women, and children that are comfortable to wear while also being durable and fashionable.

VKC, based in Kozhikode, Kerala, India, is one of the biggest footwear manufacturers for men's and women's footwear. It is considered to be one of the biggest players in India's organised industry, with a daily production of 0.4 million pairs being made each, which makes them not only the leading manufacturer in India but also among the top worldwide brands. VKC also exports its products to countries including GCC nations, Singapore, and Malaysia, among others.

Lakhani Footwear is one of the largest sports shoe manufacturers in India. Lakhani Footwear has a total capacity of 55 million pairs per year to meet the demands of customers in all different areas. Lakhani Footwear has set up state-of-the-art plants in Faridabad, Dhar, Haridwar, and Noida to produce sports shoes, canvas shoes, and EVA slippers. Lakhani understands how important it is for athletes to have a pair of shoes that fit just perfectly. For that reason, Lakhani's factories have acquired cutting edge machinery and empathetic human talent.

Red Tape is a leading manufacturer of shoes in India. It has three factories and sells shoes in the high-end men's casual leather, formal, and sneakers categories. The company was founded in 1973 by Jayant Choksi from Mumbai. In the decade following its founding, Red Tape exported footwear to Germany, the United Kingdom, Peru, Uruguay, Chile, and other countries. By 2015, Red Tape had 250 employees and 2 brands: Namasté (the high-end range) and Flagship (the mid-range line).

Khadim is one of India's largest retail footwear brands in the Indian eastern region serving the price-conscious consumers, especially to the middle-class segments of India with high quality and low prices. The brand has become synonymous with comfort, great style at affordable prices. Since Khadim believes in Fashion for Everyone, it does not compromise on style or personal comfort when making its collection of footwear that is designed for everyone. The company has a strong foothold in East India and is one of the three largest brands in South India. They also run a distribution business that does business with over 500 distributors!

Carbon Footwear manufactures a wide range of shoes in designs that range from casual to formal. A company which was established in 2006 in Jaipur, Rajasthan. Carbon Footwear specialises in a lot of areas when it comes to shoe manufacturing, but a few, in particular, include tennis shoes, casual shoes, flip flops, and school shoes. They have a team of quality control specialists. They also have laboratories, which means that they can produce footwear products that meet international standards, or they can at least work towards meeting these standards by working towards these goals.

The Paragon Group of companies is one of the leading organised footwear suppliers in the nation. The Footwear Company’s total production capacity (in-house) is 400,000 pairs a day. Apart from in-house production, the Footwear Company has also outsourced its production to some of the finest shoemakers in Bangalore and other places worldwide. Established in 1975, Paragon's s production facilities and laboratories test raw materials, semi-finished, and finished products. Each level of production is monitored closely to ensure the product is processed in a sanitary and hygienic manner so as not to compromise the brand's quality standards.

Founded in 1989 by Mr Subhash Chander Gupta, Lancer Footwear is now a USD 100 million company that services the needs of individuals looking for high-quality work shoes and safety boots. The company has seven state-of-the-art manufacturing facilities located in Delhi and Haryana, India that produce over ten different styles of footwear for different purposes, including sports shoes, casuals, slippers and more. The company enjoys unparalleled consumer insight and inspires many customers through an unmatched design aesthetic. It has been awarded numerous esteemed accolades for its products and recognised for the talent of its well-respected workforce.

Q. Who are the top shoe manufacturers in India?

Ans. The top shoe manufacturers in India are:

Q. What are the latest trends in the shoe industry in India?

Ans. According to the reports, the Indian footwear market is growing at a CAGR of 4.5 per cent in India. However, due to the current pandemic, 2020 witnessed changing consumer needs. India's homegrown e-commerce player Flipkart observed some interesting trends on the platform. To become more fit and healthy, Indian shoppers have been increasingly searching for athletic shoes lately. Running shoes have been the top searched items under the sports footwear category. Meanwhile, sales of sports footwear across Flipkart have seen a spike of more than 1.5X times from pre-Covid days –and –the revenue has steadily grown 20 per cent from July to August.

Q. What are some common problems faced by Indian shoe manufacturers?

Q. What is the number 1 shoe brand?

Ans. Nike is the world leader in shoes, selling over $28 billion worth of shoes and apparel in the fiscal year 2021.

Q. Who is the largest shoe manufacturer in India?