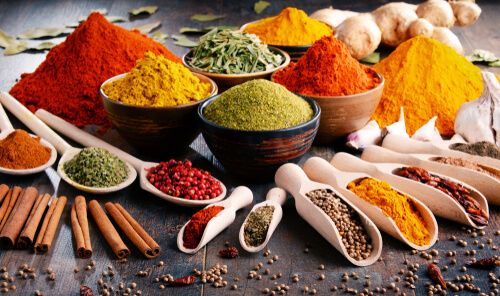 There is an American proverb, variety is the spice of life. We couldn’t agree more with this fact of life. But for us – Indians – spices are the lifeline of our culinary desires. We cannot imagine our taste buds without a pinch of spices. A pinch of any spice or some salt can make or break any dish. Thanks to all spices manufacturers in India who provide some amazing spices and make our lives spicy, tasteful, and full of variety.

Indian spices are famous all over the world. No need to mention that the secret of Indian delicacies and their finger-licking flavours lies only in its rich spices. For thousands of years, Indian spices have been used for preparing aromatic dishes. Let’s delve deep into the Indian spice industry and find out the top spices manufacturers in India – the brands who are behind the great taste, delicious aroma, and finger-licking flavour of Indian cuisines.

Who Are the Top Spices Manufacturers in India?

Remember the line ‘Asli Masale Sach Sach’? The moment we hear the line, one image instantly comes into our mind – the image of a grandpa. Actually, the line and the image have become synonymous with Indian spices for us.

Known as India’s spice king, the image of the grandpa was actually the owner of MDH Masala, Mr Mahashay Dharampal Gulati. With a whopping net worth of 5400 crores, MDH Masala is perhaps the most well-known spice manufacturer in India.

Everest is one of the top spices manufacturers in India who are known for their superior quality Indian spices. In fact, Everest is the largest selling brand of spices in India and has been in the spice business for around 50 years now.

Another spice manufacturing brand, Badshah Masala has been running its business for more than 6 decades now. Established in 1958, the brand is now one of the top spices manufacturers in India. Thanks to Badshah Masala - Swad Sugandh Ka Raja that facilitates users to get the same hotel-like delicacies at home – but in a healthier and better way.

Whether you want to prepare a lip-smacking dish like Shahi Paneer or add some tabletop dispensers like pepper or salt sprinklers, the first name that comes into our mind is Catch.

Today, Catch is recognised as the topmost premium F&B brand in the country. The brand is owned by the Dharampal Satyapal Group or in short DS Group.

Catch’s spices are mostly known for their exquisite flavours and tantalising aromas.

Established in the year 1997, this UP-based spice brand can also be named among the top spices manufacturers in India. Be it chilli powder or garam masala powder, Rajesh Masala is famous for producing and processing spices in the right and hygienic way.

“Go Organic! Eat Healthily! Live Happily!” – the slogan of 24 Mantra encourages people to make the switch to organic spices. Established by Mr Raj Seelam in the year 2004, 24 Mantra is best known as the largest organic food manufacturing brand in India.

The Tata group, the owner of Tata Sampann launched this brand in 2017. Since the beginning, this brand has been particular about producing an array of pure spices and blended masalas from whole spices preserving their natural oils. The famous chef Sanjeev Kapoor is the brand ambassador of this brand.

The list of spice manufacturers in India would be as lengthy as the name of Indian spices. Let’s dig deep into some important information every food lover should know.

Q. What are the top 10 Indian spices used for Indian cooking?

Q. Which state is the largest producer of spices in India?

Ans. As per Statista’s report, the state of Madhya Pradesh is the largest producer of various spices across India. The state produces an estimated volume of more than three million metric tons of spices. Even most of the top spices manufacturers in India source a large volume of their ingredients from this state. Rajasthan and Gujarat are the other major producers that come second and third positions in the list.

Q. Which City Is Called 'City of Spices'?

Ans. Kozhikode is also known as Calicut is called the ‘City of Spices’ in India. Situated on the Malabar coast in the state of Kerala, Kozhikode earned its fame in the spice production map during classical antiquity and the Middle Ages. Since then, it plays an eminent role in the major spice trading points.

Q. What Is the King of Spice?

Ans. Among all Indian spices, black pepper is known as the ‘king of spices.’ Although black pepper and salt belong to the group of spices, salt is easily available everywhere around the world where black pepper originated in Kerala, a state in South India.

Q. Where Is the Spice Capital of the World?

Ans. Kerala has been known as the spice capital of the world, from historic times. Kerala produces a large share of India’s exported Cardamom and ‘Black Gold’ Pepper. Apart from these, the smells of vanilla, coffee, tea, nutmeg, clove, and many more spices give an aromatic aura in the air of Kerala.