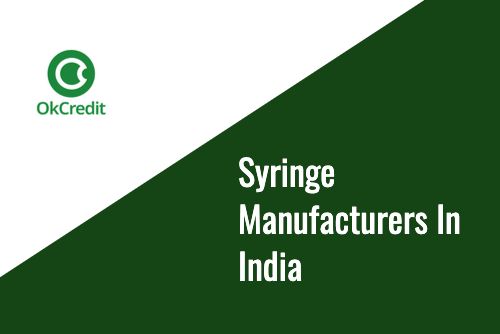 Syringes are used by doctors to inject drugs into patients via intravenous or intramuscular routes as well as by research and development professionals. Disposable syringes are a type of plastic syringe used in the human and veterinary medicine fields. Throwaway syringes are quickly replacing the age-old crystal syringes because they are available in sterile, ready-to-use, and cost-effective forms. Furthermore, because of the horror of AIDS around the world, the demand for disposable needles has skyrocketed.

The following are some of the best syringe manufacturers in India:

For decades, this company has been a prominent producer of glass syringes and glass tube engineering goods. The group was founded in 1964.

In India, the company has two manufacturing plants: one in Dahisar, Mumbai, and the other in Alandi, Pune.

The company’s skill set combined with the art of glass-working enables it to create glass objects that are admired by satisfied customers all over the world.

Lifelong Group is a multi-faceted corporation with interests in medical device production and a variety of other services. By acquiring a small plastic injection moulding company in 1995, the company diversified into car component manufacturing. The company has grown from a very small yearly revenue in 1995 to a very large annual revenue at present. In 2005, the Lifelong Group expanded its product line to include medical gadgets and disposables.

Lifelong India operates two manufacturing plants in Uttarakhand, one in Dharuhera and the other in Haridwar.

The Lifelong Group, led by the best employees, is known for its hard work and aggressive growth ambitions. Acquisitions and operations that are already ongoing will account for a major portion of this expansion.

Hindustan Syringes & Medical Equipment Ltd., a prominent producer of surgical instruments for a demanding global industry, was formed in 1957. HMD has set a standard for medical equipment production, allowing medical professionals to save human lives all around the world. All HMD products are distributed through a carefully regulated national distribution network that includes over 4500 authorised dealers.

Over and above the minimal conditions established by the relevant product standard specifications accepted by the company, it should continue to strive for continuous improvement in the efficacy of its quality management system.

BD has a world-class manufacturing factory in Bawal, Haryana, with the potential to produce over a billion Class II and IIa disposable needles or syringes per year, utilising a highly automated process that meets world standards. The Haryana State Industrial Corporation has also recognised the factory.

If you'd like to nominate a company for inclusion in this list of the best syringe manufacturing companies in India, please fill out the form below.

Q. How do you activate the safety needle?

Ans. During the conventional sequence of operation of collecting blood with an evacuated blood collection tube and needle holder, a needle assembly with a telescoping shield that extends from a starting retracted position to a venipuncture partially expanded position is used. After the procedure is finished and the needle is removed from the patient, the shield extends to a full extension and secured position over the needle's distal end, making it safe and preventing needlestick injuries.

Q. How do safety needles work?

Ans. A built-in safety device is included with a safety needle. Users must close the needle cover and engage the locking mechanism by pressing the cover cap against a hard surface once the fluid or drug has been put into a patient's body. Doing so safeguards consumers from needle stick injuries and eliminates the need to reuse needles.

Q. What is the difference between Luer Mount and Luer Lock Syringes?

Ans. Luer Mount Syringes allow needles to be connected to a Luer Tip by a Push-Fit Slip Tip. However, Luer Lock Syringes provide more secure needle attachment via a Screw-on Locking Collar on a Luer Tip. The Luer Tip is a 6% taper that is the widely used standard for connection installation in medical applications to ensure minimal leakage.

Q. What is the difference between 1 mL Insulin and Tuberculin Syringes?

The marks on 1 mL Tuberculin Syringes are in increments of 1 mL.

The above-mentioned varied markings are based on a patient's medicine dosage.

Q. How are Auto Disable Syringes different from other syringes?

Ans. Syringes that can't be reused are known as Auto Disable Syringes. They have a mechanism that breaks or locks the plunger once the injection is administered, rendering the syringe useless for re-use.