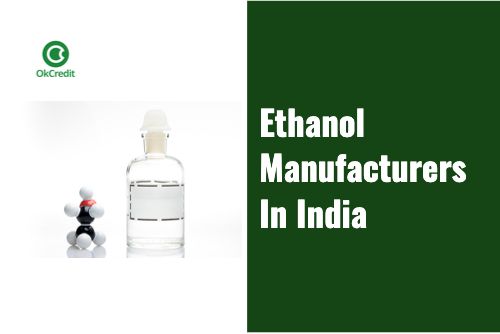 Many products remain in the background yet impact our lives strongly. Ethanol is one of them. 2020 onwards, in particular, this little known chemical is part of our daily lives. Yes, many of us do not recognise that ethanol is the primary ingredient of hand sanitisers, powerful ammunition in our fight against Covid. Therefore, it is interesting to know about the ethanol manufacturers of India. But before that, let us understand a little more about ethanol.

Ethanol is a chemical used as a solvent or additive. It is used in the manufacture of plastics, polishes, plasticisers, etc., and cosmetics, medicines, and alcoholic beverages.

To the scientifically inclined, ethanol belongs to the group of chemical compounds whose molecules contain a hydroxyl group (OH) bonded to a carbon atom.

In India, ethanol is produced primarily as a by-product of sugar manufacture. That is why all the large sugar companies are among the leading ethanol producers in India. Therefore, it is imperative also that the majority of the ethanol makers are in the sugarcane producing states.

The ethanol manufacturers in India use three types of raw materials for manufacturing ethanol:

Ethanol Companies In India: A Snapshot

The Mumbai- and based Bajaj Hindusthan Sugar Ltd (BHSL) is India's largest sugar and ethanol producer. The company, founded in 1931, is a pioneer in the sugar business in India. The first factory at Golagokarnnath in the Lakhimpur district in Uttar Pradesh had a crushing capacity of 400 TCD (Tonnes of cane per day). Today the same plant can crush 13000 Mt of cane in a day.

The company first produced ethanol in 1944 as a by-product of the Golagokarnanath mill. Today, BHSL has a cane crushing capacity of 136000 TCD and an Ethanol distillation capacity of 800000 litres per day.

BHSL produces ethanol at its fourteen integrated sugar manufacturing units in Uttar Pradesh. The company made 90900 KL of Ethanol during FY 21, over 50% more than the previous year. BHSL is on a continuous growth path. With the current government policy focusing on blended petrol, BHSL aims to be among the most prominent global players in the ethanol business. The company’s revenue in FY 21 was Rs.6688 Crores.

Balarampur Chini was founded in 1975. The Kolkata-based company is among the largest manufacturers of sugar as well as ethanol. The company’s ethanol distillation capacity is 520 KLPD and a cane crushing capacity of 76500 TCD.

The distilleries are located at Balarampur, Manakapur, Gularia (all in Uttar Pradesh). A new distillery is in the pipeline at Maizapur with an installed capacity of 320 KLPD. FY 21 saw the company generating revenue of Rs.4812 Crores.

The company plans to increase ethanol production from molasses with no residual sugar and sugar cane syrup to increase the contribution of ethanol in blending with petrol. In addition, the active environment management policy of the company is aimed at reducing the impact of the distillery and neutralising the carbon footprint.

The company entered the sugar and ethanol business in 1994 by starting its first unit at Ramgarh in UP. Subsequently, the company expanded its ethanol manufacturing capacity by setting up Greenfield plants at Jawaharpur and Nigohi, both in Uttar Pradesh and Kolhapur in Maharashtra. As a result, the total ethanol distillation capacity of the company stands at 305 KLPD (kilolitres per day).

Dalmia Bharat Sugar produces several ethanol products by the distillation of molasses.  The Product range includes Rectified Spirit (RS), Extra neutral alcohol (ENA), potable triple distilled alcohol used in the liquor industry in cosmetics and perfumeries. In addition, fuel grade anhydrous ethanol for blending with petrol and Denatured spirit, which is used by the chemical industry as a solvent.

Shree Renuka Sugars is a global agri-business conglomerate and bio-energy Corporation.  The company is among the largest sugar and ethanol producers in the country.  Of the seven integrated sugar mills of the company, five are in Karnataka: Munoli, Athani, Havalga, Gokak, Ratbag and two, in Maharashtra: Ratnaprabha, Panchaganga.

The total sugarcane crushing capacity of the company is 35000 TCD; and, the ethanol distillation capacity of 930 KLPD makes Shree Renuka one of the top ethanol manufacturers in India. The company mainly produces fuel-grade ethanol, sold to the oil companies. The estimated turnover of the company in FY 21 was Rs.5100 crores.

Triveni (established in 1932 as the Ganga Sugar corporation Ltd) is one of the largest integrated sugar manufacturers in the country (founded in the year 1932), with seven sugar mills in UP. In addition, the company's two distilleries located at Muzaffarnagar and Sabitgarh (both in UP) has a combined capacity of 320 KLPD of Ethanol.

The company is enhancing its ethanol capacity to 660 KLPD, which is expected to stream within a year. Besides, two new distilleries are also in the pipeline. The company is a significant supplier of ethanol to the oil companies in India for blending with petrol. The turnover of the company in FY 21 was Rs 4664 crores.

a) As a petrochemical, by hydration of ethylene: where a mixture of ethylene and steam is passed over an acidic catalyst under high pressure and temperature;

b) Through a biological process by fermenting sugars with yeast, where typically raw materials like sugarcane and maize go through fermentation and distillation to yield ethanol.

The following table indicates the sector-wise consumption pattern of the various ethanol items produced by the ethanol manufacturers in India:

The real sugary twist to the ethanol producing companies in India is the recent focus on ethanol as a petrol additive.

The high crude prices have speeded up the ethanol addition plan, which is currently around 8% to a litre of petrol. However, the government is actively working towards increasing the level to 12% shortly and ultimately to about 20% (to a litre).

Necessary policy support will help the ethanol manufacturers in India to ramp up production soon. But, more importantly, the challenges faced by the industry in terms of excess sugar production will automatically be taken care of by this move.

Ans. Sugarcane is crushed to produce sugar, and the process generates several types of molasses classified as A, B and C depending on the intrinsic sugar content. While A-class (high sugar content) is utilised exclusively for sugar production, the B-class, which has some sugar, has mixed usage. The C-class again has no sugar content and is typically used for ethanol production.

Q.  How much molasses is required to produce ethanol?

Ans. The sugarcane crop typically has a 14% TFS (total fermentable sugar) content. Under average production, 1 MT of sugarcane yields 115 kg of sugar and 45 kg of molasses (at 11.5% recovery). The molasses (45 kilograms) is further distilled fractionally to produce around 11 litres of ethanol.

Q. Why are most of the leading ethanol manufacturers in India on an expansion spree?

Ans. The policy of 15 to 20% substitution of petrol with ethanol has hugely expanded the ethanol industry scope. Therefore, every company wants to gain some share of the additional market.

Q. Which is the largest ethanol-producing state in India?

Ans. Uttar Pradesh is the largest ethanol-producing state with over 50 units of various ethanol manufacturers in India located there. Around 60 crores litres+ ethanol is produced in UP.